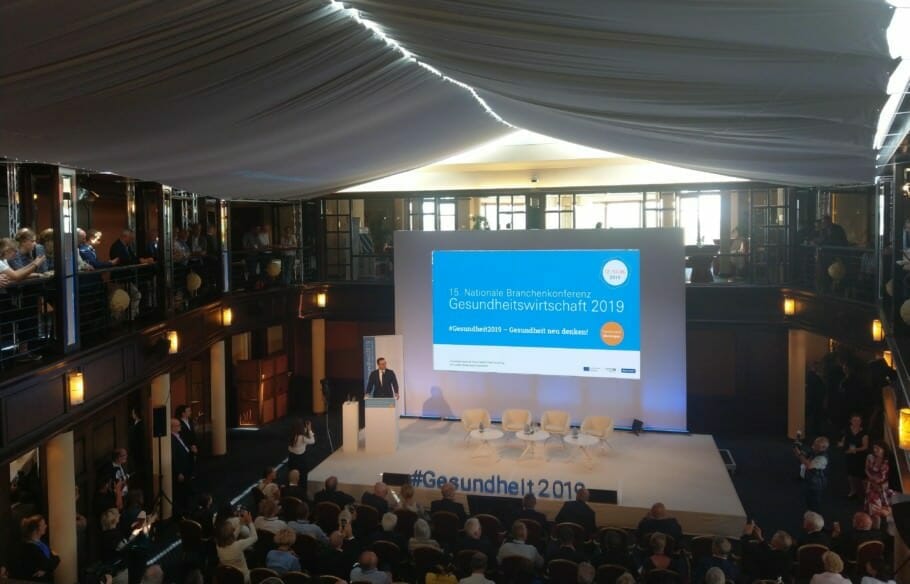 Simone Janson is publisher, Consultant and head of the Institute's job pictures Yourweb.

Content - More knowledge, PDFs books and personal advice here Hide
Healthcare Efficiency: Does Capitalism Improve Quality?
The Efficiency Dilemma: Between Regulation and Competition
Federal Minister of Health: Overregulation hinders innovation
Digitization as a marginal topic in German politics
Privacy, German fear and the look abroad
When health data is managed digitally
Efficiency as a panacea for more quality?
Digitizing hype vs. digitization frustration
How economical may administration be?
When the state does marketing

Health is a human right and it is best not to function according to the laws of the free, capitalist market - at least that is the position of business ethicists like Prof. Dr. med. Dr. Giovanni Maio, Director of the Institute of Ethics and History of Medicine, Albert-Ludwigs-Universität Freiburg, at the 15. National Industry Conference Health Economy in Rostock.

Federal Minister Jens Spahn, on the other hand, made it clear in his speech at the 15.06.19 in Rostock that this was not so easy: he announced a discussion on the quality of health care, especially with regard to in-hospital quality measurements in hospitals, but also improvements in the area of ​​care very important.

The Efficiency Dilemma: Between Regulation and Competition

Regarding regulation and legislation, however, Spahn finds himself in a dilemma between efficiency and necessary regulation: on the one hand, he finds legislation and regulation important: for example, to grant access to medical care for everyone, everywhere, including in rural areas.

"Without need planning, we simply wouldn't have doctors in the country because everyone wants to work in the cities." It is also efficient to put care products on the doorstep for older people six months in advance, but that is just as pointless as the combination of assisted living and short-term care. According to the Minister of Health, this has to be sensibly regulated in order to create a framework in competition.

After all, over-regulation is detrimental to the innovative strength that is so important in the healthcare sector, not only because competition helps to make processes more efficient and thus also saves costs. "If we regulate too much, startups will move to the USA with new ideas," Spahn stated.

Because that in other countries, especially in the digital field is much further, was apparently recognized in the Federal Ministry of Health. Spahn referred to current developments of large digital companies such as Apple or Google in the health sector.

Digitization as a marginal topic in German politics

Nevertheless, the important topic of digitization, which is also pioneering in all other areas, was dealt with quickly in just a few sentences. This gives reason to fear that it has just not been recognized how much digital technology will affect all areas of society, including quality in hospitals and care.

How far this could change socially is shown by a thesis that I heard in a lecture just two days later at the University of Witten-Herdecke: Expertise will become less important in the context of digitization - and with it, for example, the importance of the medical profession. Rather, in a digitized world, interpersonal, empathetic skills, such as those of nurses, will be much more in demand. This could completely reverse the importance of the relevant workforce on the labor market.

After all, with regard to the German fear of data protection, Spahn stated: "We have to be active here if we don't want to endure anything in the end". If you now look at countries that are already significantly further ahead in digital development, it quickly becomes clear that in practice there are still a number of steps to this active design.

The best example of this, of course, is Estonia, that when I visited a few years ago, I clearly demonstrated how old-fashioned and inefficient administrative processes really are in Germany. And how much more efficiently everything could be made - but also that the topic of data protection will be the sticking point, especially in the critical health sector.

When health data is managed digitally

An average Este, for example, needs 15 minutes for a tax return. The record for starting a business is 18 minutes. With an electronic signature you can conclude contracts in a few minutes. The parliamentary election can be done in five minutes by mobile phone from the sofa. And a Cabinet meeting lasts only about 45 minutes - because the ministers no longer have to dig through piles of paper.

It goes without saying that Estonians can also view their entire health data transparently online, as it is not laboriously passed on on outdated storage media as in Germany - and above all not only among doctors and health insurance companies. You can't just get married and get divorced online there.

Efficiency as a panacea for more quality?

In fact, in addition to efficiency, this is the most important argument for digital administration: the transparency and accessibility of one's own data for each individual citizen. The system should also be safer than paper management, even if there were already hacker attacks that were successfully defended.

If you now consider how much time and money you waste in Germany by postal vote or for the tax return. Or for contracts, can only be enthusiastic about the Estonian system - right?

In any case, the Estonians I met were always impressed by their efficient, digital administration. This efficiency, in order to save both time and money, is also the reason why Estonia's administration has relied fully on electronic data processing since the founding of the country.

If you then ask your representatives about the problems that are constantly discussed in this country, such as data security and data protection, they are happy to answer the question: Whether we shouldn't also use Google or Facebook use? Or they answer in general terms: there simply cannot be a completely secure system.

How economical may administration be?

Although that's certainly true, this mass of well-made self-PR irritated me a bit. What I found, almost accustomed to the German officials, even more irritating, was the measure in which economic thinking was also accompanied by government agencies with the e-government services.

Since this also concerns the digitized health administration, here we are quickly back to the question of medical ethics raised above: How economically should administration be organized, and especially in the health sector?

When the state does marketing

After all, the whole thing has long since become a marketing topic: the digital signature has already been successfully exported to other countries, including Switzerland and Azerbaijan. Taavi Kotka, secretary-general for ICT at the Estonian Ministry of Economic Affairs, stated in a speech and later in a video interview, quite openly, that it should be allowed to buy together citizenship rights in different countries.

On the one hand, of course, it's great when citizens can benefit from a leaner state. On the other hand, it is a bit strange for me to publicly think about how to market these efficient structures in other countries as well.

Learn more - eBook made to measure, eCourse on Demand or personal advice

eBook custom made: You want a book on a topic of your choice? We are happy to put together a book according to your wishes and deliver in a format of your choice. Please enter when booking under "interests" your desire.