In 2019, Barack Obama, the 44th President of the United States, will give the opening speech at the Bits & Pretzels start-up festival in Munich, Europe's leading festival for start-ups. Hollywood star Jessica Alba will speak at the end of the event. 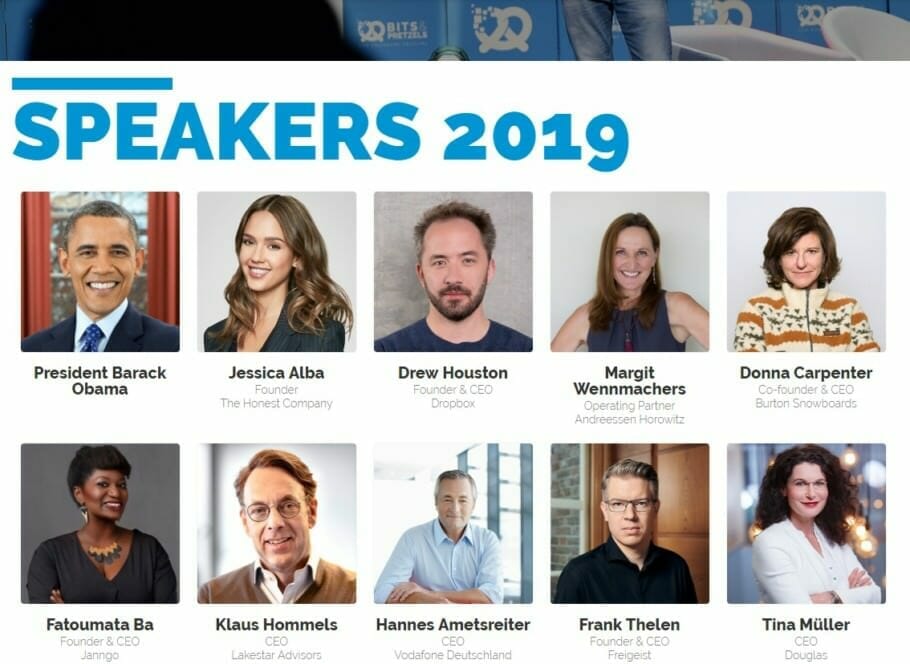 The Bits & Pretzels start-up festival in Munich lasts three days during the Oktoberfest every year, this year from September 29 to October 1, 2019, which started in 2014 as a start-up breakfast. Meanwhile 5.000 founders and investors come together here every year to talk about their ideas and get inspiration.

Many more CEOs have chosen Bits & Pretzels' stages to share their stories and insights about their entrepreneurial experience.

Best of HR – Berufebilder.de® will be there this year and report live from the event and especially from Barack Obama's speech.

Barack Obama talks about the leadership of the world

Barack Obama at his conference opening in a moderated conversation, President Obama will address his time in office and his thoughts on leadership in the world. When he was at 4. November 2008 was elected, he took over the presidency in a crisis that was different than anything America had seen in recent decades - a nation at war, a planet in danger, the American dream itself threatened by the worst economic disaster since the Great Depression.

And yet, despite all of the political obstacles, Obama's leadership has helped save the economy, revive the American auto industry, reform the health care system to feed another 20 million Americans, and set the country on a strict course for a clean future Energy, all while driving the biggest initiative to create new jobs in American history. Since the end of the presidency, President Obama has continued his lifelong goal of empowering people to change the world as a community.

Hollywood star Jessica Alba, who is best known for her role in “Dark Angel” and Hollywood blockbusters (“Sin City”, “Fantastic Four”), will speak at Bits & Pretzels October. Alba founded The Honest Company in 1. Founded out of conviction, the company manufactures natural care products and housewares for a wide variety of consumers.

As an avowed advocate of safe baby items, Alba is the driving force behind the brand. She directs the overall vision for The Honest Company and oversees the business in collaboration with CEO Nick Vlahos.

Starting with just 17 products, the former startup developed into a successful concept with a portfolio of 100 different products in the categories baby, beauty, household, vitamins and dietary supplements.

In her speech, the actress, who has primarily become an entrepreneur, presents her personal path as a founder, a billion-dollar company reportedly. In conversation with Tina Müller, CEO of Douglas, Europe's leading beauty retailer, she introduces the exclusive partnership between the two companies. Douglas introduced the Honest Beauty products to the European market.

Learn more - eBook made to measure, eCourse on Demand or personal advice

eBook custom made: You want a book on a topic of your choice? We are happy to put together a book according to your wishes and deliver in a format of your choice. Please enter when booking under "interests" your desire.